Whether it’s time to paint your living room or restructure your company, knowing when to make a change is not always obvious. But one thing is for certain: It’s never easy.

Consider the widening debate over what to do about daylight savings. When the clock jumps forward in the spring, we sorely miss that lost hour. It disrupts the circadian rhythms and darkens the morning commute. It’s not much better in the autumn, when night suddenly falls like a curtain. These inconveniences have inspired a political movement to end to what seems like an arbitrary ritual. But even an attempt to change a bothersome custom has caused some angst around the country.

Before leaders of organizations can steer a company through change, it helps to first consider the inevitable resistance. Is it worth it? McKinsey & Company found that 70 percent of all organizational transformations fail. On the other hand, another McKinsey study found that when change is managed well, companies enjoy an average of 143 percent of the returns they expected. So before you invest time and money in an update, consider the following steps to evaluate whether a proposed change is really necessary.

Any change-maker will tell you that strong communication is the most important ingredient to implementing something new. It’s also vital during the decision-making process. Time spent talking with members of your team “equalizes the power dynamics, reduces anxiety, and conveys respect for all as important stakeholders in the enterprise,” according to Barbara Dyer, president and CEO of The Hitachi Foundation, who has led her organization through seminal transformations.

“My view is: you share the good, the bad and the ugly,” says Steve Vamos, a former Microsoft VP who’s now CEO of the cloud-based accounting SaaS company Xero. “People in the company email me directly, they don’t come through three levels of management.”

Communication also helps an organization’s leadership think through its “story,” which becomes its argument for undertaking the immense challenge of institutional change. A compelling narrative will go a long way towards making employees see the purpose of the shift. In the process, leaders can gauge what they are taking on and determine if it’s what they really need.

At every stage in the transformation process, you need to reconvey the overarching goal and why it’s necessary and achievable, and ensure that the people driving the change stay involved and motivated. Once the changes are in place, you must deliver the messaging that solidifies their status as the new norm.

Team leaders often feel pressure to keep up with the competition. But what works for one organization may not be right for another. Change for its own sake can lead to a never-ending cycle of chasing the unreachable. Every adjustment should be rooted in an urgent and definable need.

Take stock of what’s working and what isn’t. This process demands a methodical collection of data, customer preferences, and accounting. If you aren’t precise about identifying the problem areas, you risk losing the best part of your operation. Keeping the good parts will be critical to maintaining an anchor of stability during a transformation.

While this may feel tedious, time spent during this phase will save effort later. Consider the lesson from Instagram’s evolution. During earlier versions of the popular social media platform, the app featured many more functions than it does today. Creators conducted a user behavior analysis, which found customers were really only interested in the photo-sharing function. So the company poured all of its resources into this feature, helping make the app one of the most popular social media platforms ever.

What else is going on in your organization

If you’re getting ready to embark on a significant shift at your company, take stock of the entire ecosystem to guard against unintended consequences. Russ Reynolds, the CEO of Batteries Plus Bulbs, recommends asking, “Do we have the capacity to play?” That means looking around to see if your proposal would interfere with an IT restructuring or some other substantial initiative happening elsewhere in the company. The answer to this question will depend on the size and scope of your organization. It doesn’t mean the proposal under consideration should be scrapped. But be aware that introducing it during a time of upheaval may be setting it up for failure.

Change is hard, and success is harder, but transformations can work when undertaken with care.

Change Management in 2020: The Current Outlook

A Major-League Approach to Managing Change


The guide provides insight into how well a product or service fulfills certain functional capabilities – with a forward-looking market direction and analysis provided.

In the report, Gartner, Inc. mentions/states that “by 2024, 50% of all program and portfolio management (PPM) leaders will integrate complementary technologies to enable portfolio decision making and adaptive work management for digital business evolution.”

Clarizen offers a complete solution that connects work across the enterprise, turning ideas into strategies, plans, and action. With Clarizen, organizations can work the way they want to work and have real time visibility across all workstreams in their portfolio. This keeps teams focused on the things that matter, provides the real-time information needed to make more accurate and timely decisions, and delivers results faster to meet and even exceed company goals and customers’ expectations.

Discover what sets Clarizen apart from other vendors in the marketplace. 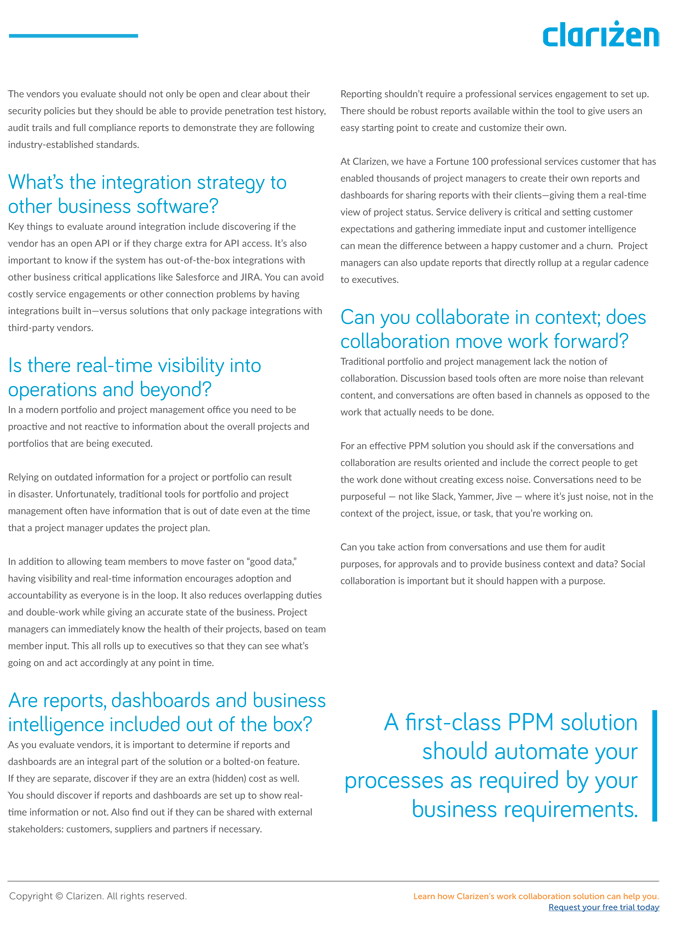 X
Share this ArticleLike this article? Email it to a friend!
Email sent!